FiLiA conference 2022: Transphobia, harassment and arrests at conference in Cardiff

From the 22nd to the 24th of October 2022 the registered charity FiLiA held its annual conference in Cardiff. While the conference bills itself as a gathering of feminists, a disturbing trend of anti-trans extremism, conspiracy theory and harassment of trans and GNC people has emerged.

FiLiA are a registered UK charity with a declared annual income of over £200,000 and have been holding conferences since 2013. Their stated aims include “Building Sisterhood and Solidarity”, “Amplifying the Voices of Women” and “Defending Women’s Human Rights”, however, much of the content on their website indicates a hostility to trans women, conspiratorial beliefs about sex work and an antipathy to solidarity with sex workers and trans people more generally, including:

While FiLiA denies claims that it is anti-trans, many of the events at the conference suggest otherwise, including:

Solidarity from the local community

Ahead of the conference a number of LGBTQ+ organisations across Cardiff signed a statement of support for all women and girls, both transgender and cisgender. Members of the trans community visited local businesses near the conference venue and asked them to display a trans pride flag in solidarity. This appears to have enraged many attendees of the conference, who accused the businesses of seeking to “intimidate” them with the display of a flag.

Some attendees went as far as to enter the businesses concerned and complain about the flags. In at least one case, a conference attendee chose to highlight the presence of a possibly trans or GNC staff member in the shop.

We spoke to the manager of one local business that displayed a trans pride flag, they said that people came to the premises to demand that they take the flag down, describing their behaviour as “angry”. Following this incident, the manager posted on their personal Twitter account about it and was quickly inundated with aggressive and insulting responses from gender critical Twitter users. The manager said that they felt “overwhelmed” by this.

At first it was challenging and I was happy to talk to people about my opinions and why I chose to show support for the trans community[…until] the people tweeting me turned nasty and abusive to myself personally and not the situation my tweet had originally commented on. I however, regret nothing. I’d do it all again tomorrow and the flag is still in the shop window.

According to claims by gender critical activists on social media, two conference attendees were arrested on Sunday night after one harassed a person they claimed to be a man using a public toilet. These included EM Pankhurst and a person going by the name “Bradders” on Twitter. According to their own account, this comprised approaching the person (who we assume they believed to be a trans woman) and demanding that they leave the toilet. A further account by a FiLiA conference attendee appears to confirm that a group from the conference were asked to leave after demanding that a trans woman leave a toilet and arguing with security staff when they were challenged on this. It is not clear at this point when the police were contacted or if either arrestee has been charged with any crime. 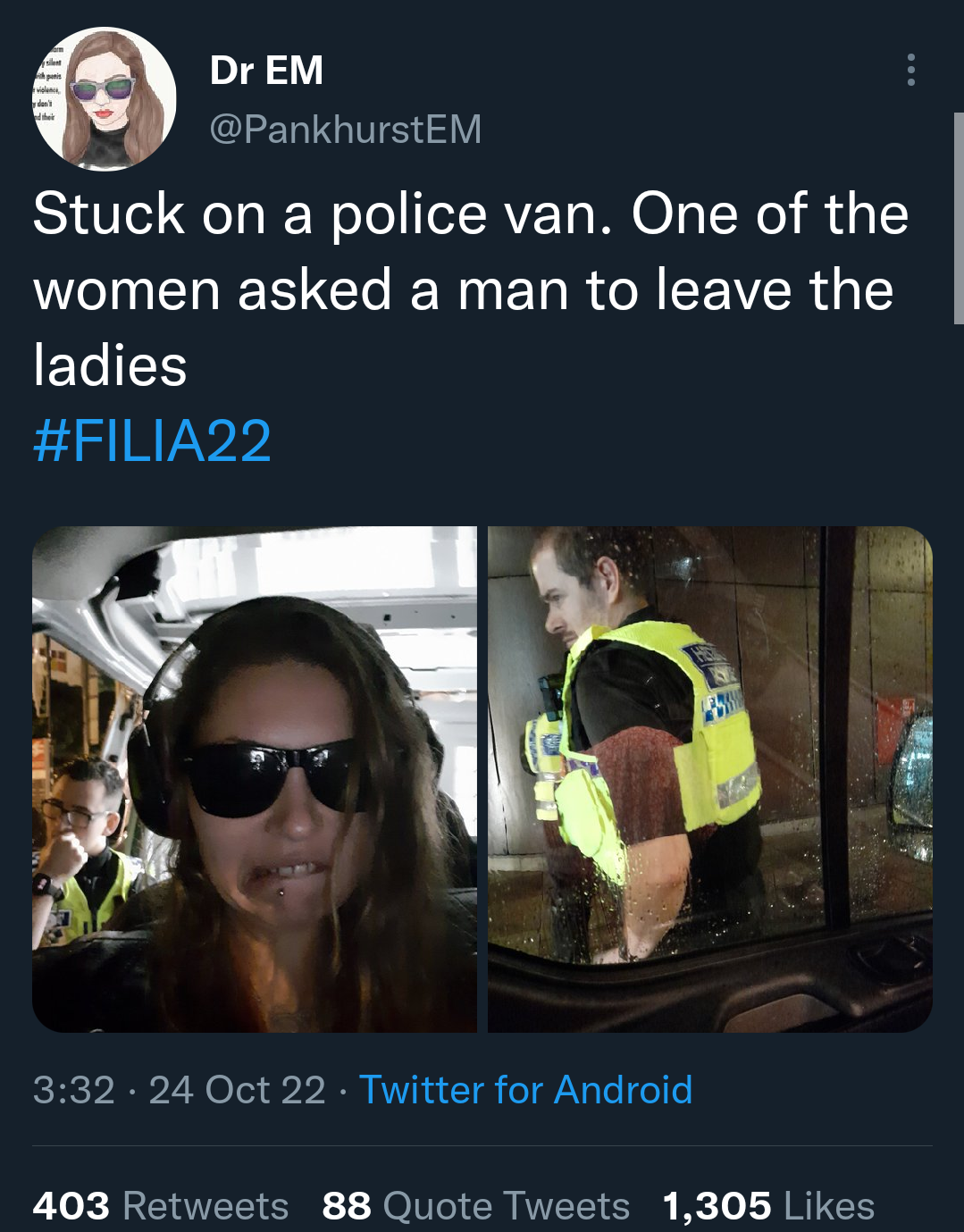 Per case law, trans women are legally allowed to use women’s public toilets in the UK and preventing them from doing so can amount to gender reassignment discrimination under the Equality Act 2010. TSN legal researcher Jess O’Thomson said:

Pubs are under no legal obligation to provide single sex toilets, they are merely enabled to if it is a proportionate means of achieving a legitimate aim - and it is likely unlawful harassment to target a trans woman for using one.

It is concerning that a registered charity was able to hold a conference that appears to have been an organising point for anti-trans politics, spilling over into the harassment of trans members of the public going about their business in the area surrounding the conference. TSN have contacted FiLiA for comment but have received no reply at time of publication.