On the 26th October 2021, the BBC published an 4000 word long read defaming trans women collectively as being a threat to lesbians, using multiple unreliable sources, including a hate group1 and a known sexual abuser, reproducing a known and already debunked transphobic hoax".

Having started her research for the article over a year ago, the author Caroline Lowbridge should have known better. All of the relevant pieces of evidence for concern about the sources were available at least a year ago. Over the week that followed publication, evidence surfaced of numerous issues with the article that Lowbridge would have known in advance. Lily Cade, the only named primary source for the article, published several death and rape threats against named individuals, following people exposing her history of sexual assault.

The BBC have nine days later (4th November 2021) published a correction admitting to excluding necessary context from the article, and chose not to include context which would necessarily change the impact of the article for future readers.

We call on the BBC to address our concerns and begin an accountability process for the endemic issues with this piece. We invite our followers to raise the following concerns with the BBC over this piece via the BBC complaints process.

This article was based on a hate group's self-selecting questionnaire

Get The L Out are described by the BBC as a group "whose members believe the rights of lesbians are being ignored by much of the current LGBT movement." It is true that the interests of lesbians have been marginalised by the wider LGBT movement. However, Get The L Out are not just any lesbian advocacy group, but are in our view an anti-trans hate group. This is supported by the fact they are organisational signatories to the notorious "Women's Declaration" which according to legal academic Sandra Duffy is "a call for the removal of transgender persons from public life".

On the front page of their website, Get The L Out say: "We stand against any kind of misogynistic politics and systems that prioritise men’s interests: queer politics and transgenderism..", and further on, "[w]e are witnessing how transactivism erases lesbians, and silences and demonises lesbians who dare to speak out". This is clearly an attack on all trans people, and all trans civil rights advocacy, making the demonstrably untrue claim that trans activism is simply a tool to destroy and silence lesbians.

On page 10 of the questionnaire that the BBC link to in their piece, Get The L Out go even further and quote Janice Raymond's theories that "transgenderism" (an offensive term to refer to the practice of existing as a trans person) is an attempt to invade the lesbian body. They directly quote Raymond's claim that "[a]ll transsexuals rape women's bodies". 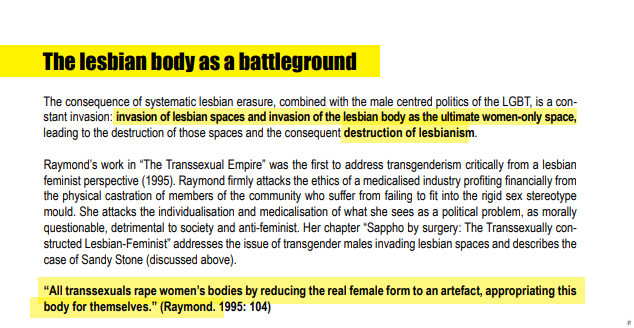 An excerpt from the research piece linked by the BBC

This raises concerns not just for the quality of BBC's research and editorial processes (including relating to the selection of survey participants), but for the fact that the BBC is leading its readers via hyperlink to a piece of hate propaganda. It is not conceivable that the author of the piece didn't notice this hate material.

The BBC framing legitimised hate material dressed up as research

Because the BBC failed to acknowledged that this research was originally conducted to support a conspiracy theory that transition is a plot to colonise and destroy lesbianism, and because the BBC linked to, and quoted extensively from the propaganda contained within it, the BBC have clearly colluded in spreading this conspiracy theory to their readership, while softening and laundering the ideological content of the material.

The BBC Guidelines are very clear that relative figures such as, e.g. the percentage of survey respondents who said they had experienced pressure, should not be used in controversial topics, and warn that self-selecting surveys and online votes are particularly vulnerable to campaign groups and viral marketing campaigns. It is hard to imagine how a small poll by a hate group does not fall under the warnings about use of evidence in this case.

In the update, the BBC say: "We acknowledge that an admission of inappropriate behaviour by the same contributor should have been included in the original article."

However, the BBC have not included the nature of this "inappropriate" behaviour, nor have they named the contributor. They have instead redacted her name and contribution from the article.

The contributor they refer to is Lily Cade, who has been accused of sexual assault by numerous women in her former industry, which she has admitted (warning: nsfw) in multiple blog posts. In an article where her contributions were related to the alleged sexual coercion of lesbians it is paramount that her history of sexual coercion of lesbians is included, rather than obscured.

Trans people who were consulted for this story warned the BBC about her history during the research phase. Instead of adding in the missing context, the BBC have chosen to delete part of the piece and cover up their own failings to publish evidence which was inconvenient to the author's thesis, serving effectively to cover up sexual assaults in the process.

The update note itself is buried at the bottom of the very long article, such that many will not read far enough to discover it at all. After a week of the article circulating virally online due to it's clickbaity nature, this is simply an unacceptable, trivial and insulting change.

Without correcting this, this article will continue to serve as propaganda for the hate groups promoted within, using the BBC's authority as a source of legitimate information. This will be used by these groups to enact continued harms against the trans community.

The article claims "I contacted several other high profile trans women who have either written or spoken about sex and relationships. None of them wanted to speak to me but my editors and I felt it was important to reflect some of their views in this piece."

However, Chelsea Poe was contacted by Lowbridge, and provided an interview over Zoom, which Poe says Lowbridge decided not to use for the piece. We demand that this lie is corrected, transparently, in the original article.

Poe also says she made clear that she told Lowbridge about Cade's history. If this is the case, it is urgent that BBC ensure accountability for this erasure, as this would indicate a deliberate cover up of sexual abuse.

In platforming Lily Cade, the BBC has emboldened a violent abuser

Lily Cade was a prominent source for the article. The BBC had reasons to know that she had admitted to numerous accusations of sexual assaults on co-performers. In taking a one-sided focus on trans women as a threat, and sympathising with Cade, the BBC promoted her.

As a result when trans activists and allies exposed her long history of abusive behaviour, she lashed out threatening several named trans women. Despite subsequent claims in the Guardian that she was talking about trans women's "personas" (i.e. trans women's identities, and real lives) in one of her pieces she said "if you left it up to me, I’d execute every last one of them personally".

Lily Cade left the porn industry in 2019, following widespread accusations around her sexual abuse of fellow performers. Her last blog post before the BBC piece was in 2019. She had engaged in explosive and toxic arguments with other performers as far back as 2014. However the key event that appears to have incited her in deciding to make these death threats to numerous named trans women, and multiple calls for American men to execute all trans women, is this BBC article choosing to sympathise with and hide Cade's abusive history. Within days of publication, Cade published the first of 5 pieces, calling trans women as mutliated and "mincing, self mutilated puss[ies]", exorting readers to reread the BBC piece.

Approaching the story with a serious interest in the freedom and safety of lesbians, noone who had spent a year researching this piece could conceivably have thought this was acceptable.

The BBC stripped context from and continued a transphobic hoax

Another source of evidence in the article came from a reply by a trans woman to a transphobic hoax. The BBC chose to blur the source's name and to crop out the tweet she was replying to. This tweet by Arielle Scarcella re-used a photo from a viral, poorly executed hoax, conducted by anti-trans hate groups which had already been exposed as such in the week before.

In the responses to Scarcella's original tweet, dated 1st March 2020, there are numerous trans activists and allies responding attempting to raise concerns that it is a hoax. It is not credible that Caroline Lowbridge would not have seen these tweets several months later and had reason to investigate further.

Worse still, this transphobic hoax finally reached media attention in August 2020 as one of the culprits of the stickering campaign behind it was visited by the police as was reported in DevonLive. This is a matter of the public record. The story then became part of national news, albeit omitting the fact that the police referral had specifically resulted from perpetrating a hoax attempting to direct anger at LGBT groups.

In publishing reactions to this hoax which Lowbridge must have reasonably known about, BBC have chosen to extend the reach of the hoax campaign, contributing to disinformation and undermining public trust in the BBC's reporting standards.

The only country the BBC republished this piece in translation is Brazil, where trans murder rates are the highest recorded in the world

The BBC internationalised this article in only one country: Brazil. Given that one of the original sources for the article has already threatened to and called for the murder of several named trans women, it is important context that Brazil has the highest murder rate for trans women of any country in the world.

In doing so, this article put our Brazilian trans siblings at risk. Last year, under the far right Bolsonaro government, 175 trans women were murdered, a 41% rise on the previous year. More trans women in Brazil were executed last year than were survey respondents in the hate group propaganda used to make this article in the first place.

It is unimaginable error of judgement, at best, that this was selected as a locale to promote a translation of this inflammatory piece. At worst, the BBC consciously and deliberately decided to stoke the flames of anti-trans violence in Brazil.

The BBC has a long track record for institutional transphobia

The trans community has a growing lack of trust in the BBC more generally as a result of this wider failure to engage with those raising concerns. Our complaints are dismissed, even when BBC journalism clearly falls short of ethical standards. Quality at the BBC is degrading and will continue to while the BBC continues to ignore outside feedback.

1. We demand that the article is retracted on the basis that, among other reasons:

2. We demand that the BBC print a full apology for the harms done to trans people and lesbians

3. We demand that the BBC immediately begin a restorative justice process with the trans community

The BBC must engage with its institutional transphobia, listen to feedback from groups like Trans Media Watch, and work on addressing the systemic issues that led to this article's deviations from journalistic standards of accuracy and impartiality.

For the purposes of these demands we are using the definition given by the Southern Poverty Law Center, who define a hate group as "as an organization or collection of individuals that – based on its official statements or principles, the statements of its leaders, or its activities – has beliefs or practices that attack or malign an entire class of people, typically for their immutable characteristics."

They add that these groups "vilify others because of their race, religion, ethnicity, sexual orientation or gender identity". An organisation dedicated to declaring all trans women rapists on the basis of being trans women clearly fits this definition.