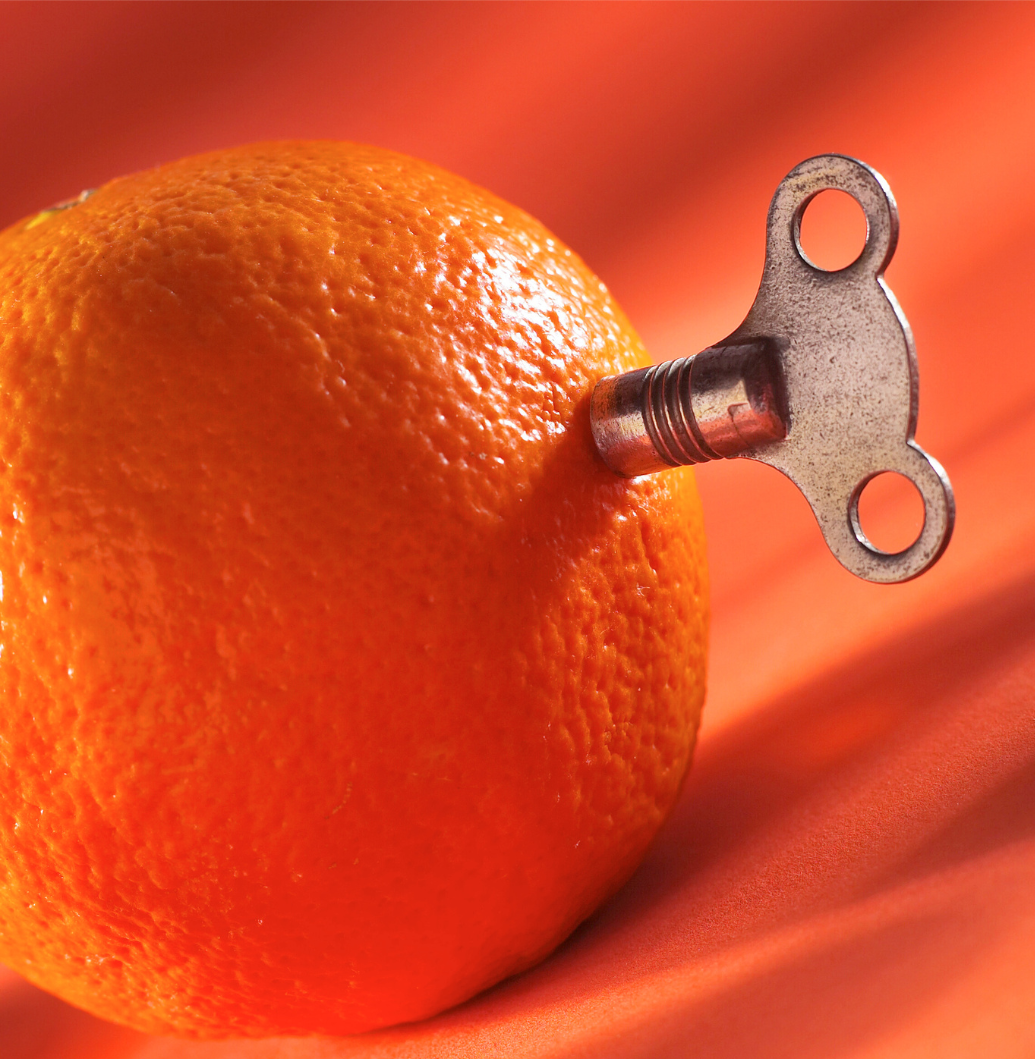 Content note: The following article seeks to lay out the evidence and extent of torture and conversion therapy in UK psychiatric institutions. This includes graphic descriptions of the practices involved which may be upsetting.

Starting in the 1950s, NHS psychiatric institutions played host to a program of torturing and brutalising LGBTQ+ people in an attempt to make then heterosexual and cisgender, known as “aversion therapy”. This was endemic up until the 1970s, with evidence of occurrences continuing into the 1980s. In this piece I hope to summarise what has been uncovered by historians, journalists and LGBTQ+ community activists about a largely forgotten atrocity committed against our community.

What is Aversion Therapy?

‘What was going through my mind was not that I was scared of being gay. I was petrified I would not come out of this mental hospital alive. I was a very frightened young man.’ - Oscar Mangle, quoted in Tommy Dickinson, ‘Curing queers’: Mental nurses and their patients, 1935–74, pg 70

Aversion therapy developed during the rise of behaviourist theory in psychology, beginning in the 1930s initially targeting addicts and becoming increasingly popular for “treating” so called sexual deviance (ranging from harmless variations in behaviour and attraction such as being LGBTQ+ to harmful sexual urges such as paedophilia). 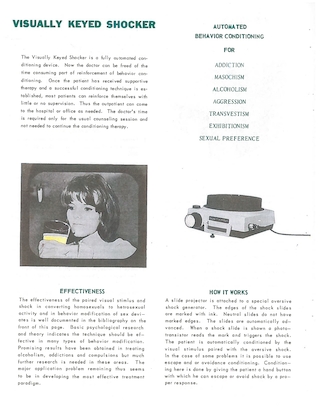 Advert for a “Visually keyed shocker”, an aversion therapy device marketed in US Medical journals. Via Williams, Marks and Pick 2018

Mental health practitioners using aversion therapy believed that they could condition people out of “deviant” behaviour through inflicting extreme pain and distress with electric shocks and/or the adminstration of drugs to induce severe nausea while they were exposed to a stimulus associated with their “deviance”, such as sexual images of people of the same gender for gay people or wearing clothes associated with a non-assigned gender for trans people and crossdressers.

Many survivors of this treatment describe squalid conditions and cruelty within the hospitals where the “treatment” took place. Radio DJ Pete Price described his experiences for a 1995 Independent article:

Price was left in a locked room for 72 hours with no cleaning facilities. "They wouldn't let me go to the toilet, so you can imagine what it was like. I didn't sleep the whole time I was there. I was in a terrible state, I couldn't even think straight. If I had been able to I might have got out earlier than I did." By the end of the third day, he'd had enough. "I thought. 'I've done nothing wrong and I'm being treated like an animal, left to lie in my own shit and sick,' so I decided I was going. I started worrying about what they were going to do next because one of them had said something like, 'if this doesn't work it's the electric shocks next'. That was enough for me. I told them I wanted to go home.” - Tony Bell, I’m gay, and I don’t need a psychiatrist, The Independent, 24th of October 1995

Academic Tommy Dickinson interviewed six gay men and two trans women who underwent aversion therapy for his book ‘Curing Queers’: Mental nurses and their patients 1935-74. Their testimony echos the callous and abusive atmosphere described by Price, with one man, Percival Thatcher, describing his initial admission as ‘a barbaric torture scene by the Gestapo in Nazi Germany trying to extract information from me’, trans woman Greta Gold recounted this cruelty in great detail:

I remember sitting in the room on a wooden chair ‘dressed’ [wearing women’s clothes], but I had to be barefoot as my feet had to touch the metal electric grid. My penis was also wired up to something to measure if I got an erection - I felt totally violated […] I remember the excruciating pain of the initial shock; nothing could have prepared me for it. Tears began running down my face and the nurse said ‘What are you crying for? We have only just started!’…[Chokes]…I was speechless. - Greta Gold, quoted in Tommy Dickinson, ‘Curing queers’: Mental nurses and their patients, 1935–74, pg 74

Both systematic and casual cruelty formed the backbone of aversion therapy, which was essentially a medicalised form of torture and punishment for sexual and gender nonconformity.

People across the spectrum of LGBTQ+ identities were subjected to aversion therapy, with prominent psychiatrists in the field such as John Bancroft and Isaac Marks publishing openly on experimenting with electroshock torture on “homosexuals”, “transvestites” and “transsexuals”. Research on gay and bisexual women in this area is sparse, but Spandler and Carr (2022) documents 10 such examples.

In Price’s account for the Independent (Bell 1995), he discusses both broad social stigma and particularly pressure from family leading to him seeking referral for aversion therapy.

Smith, Bartlett and King (2004), studied accounts of 31 (30 men and 1 woman) patients who underwent some form of conversion therapy in the UK. Of these, most reported being referred for the treatments by their GP, with two men reporting that they underwent the treatment as an alternative to prison after being “arrested for homosexual activity”. Social stigma was also discussed as a common motivating factor.

Of the patients interviewed by Dickinson, one (Percival Thatcher) underwent aversion therapy as a direct result of a court order (Dickinson 2015, pg 1). Of the other seven patients interviewed, all were referred for “treatment” by their GP, however even in these cases, social stigma and fear of eventual arrest and prosecution played a strong role in their decision to seek treatment. Indeed in the case of Molly Millbury, a trans woman from Liverpool, she was taken directly to her GP for referral by her family after an arrest at the age of 16 for wearing women’s clothes in public (Dickinson 2015, pg 52-53).

Spandler and Carr, similarly, document a case of family coercion into aversion therapy with the complicity of medical professionals.

The psychiatrists told my parents about me being lesbian and this resulted in me being forced, against my will, to have aversion treatment in the hospital, which to this day I will never forgive them - Janice, quoted in Helen Spandler, Sarah Carr, Lesbian and bisexual women's experiences of aversion therapy in England, History of the Human Sciences, January 2022

Overall, the picture in the literature is one of a mixture of “consent” compromised by pressure from families and wider society and, in at least some cases, direct legal coercion into unwanted and extremely painful “treatments”.

The presence of LGBTQ+ identities in the Diagnostic and Statistical Manual (DSM) was used to justify the use of aversion therapy on LGBTQ+ people. From 1970 onwards, the newly formed Gay Liberation Front (GLF) campaigned for the depathologisation of queerness, with a series of direct action interventions (called “zaps”) at psychiatric conferences.

The US GLF was noted to be very confrontational in its campaign against the sickness model, and in 1970, the GLF interrupted an APA [American Psychiatric Association] convention. During this zap, a prominent psychiatrist remarked: ‘I never said homosexuals were sick – what I said was that they had displaced sexual adjustment.’ The GLF activists were not happy with this and one member was noted to bellow, ‘That’s the same thing “motherfucker”! - Tommy Dickinson, ‘Curing queers’: Mental nurses and their patients, 1935–74, pg 208

This campaign of direct action and interventions at psychiatric conferences forced the APA to allow LGBTQ+ people a seat at the table, with the 1971 and 1972 conferences featuring groundbreaking panels by GLF activists and a gay psychiatrist (Dickinson 2015, pg 208-201; Drescher 2015). In 1973, the APA removed homosexuality (though not transvestism or gender identity disorder) from the DSM. While similar change would not come in other countries till much later (with the World Health Organisation only removing homosexuality from the ICD in 1992), this decision was influential in the field and is credited for the gradual phasing out of aversion therapy on the NHS (Dickinson 2015, pg 222), alongside the efforts of the UK GLF in challenging psychiatrists and increasing media scrutiny as the nascent gay liberation movement exposed the practice.

The brutalisation of LGBTQ+ people by the psychiatric establishment and the state should never be forgotten and neither should the struggle to end it.

Tony Bell, I’m gay, and I don’t need a psychiatrist, The Independent, 24th of October 1995, available at https://www.independent.co.uk/life-style/i-m-gay-and-i-don-t-need-a-psychiatrist-1579114.html

Alice Evans, Trans conversion therapy survivor: 'I wanted to be cured so asked to be electrocuted’, BBC News, 23rd August 2019, available at https://www.bbc.co.uk/news/uk-49344152