"All I did was say you can't change sex": Gender Critical Ideology in the Class Room

"All I did was say you can’t change sex", and "I just believe biological sex is real" are some of the phrases you might hear when Gender Critical campaigners face consequences for their anti-trans activities. We have often heard these phrases when GCs have been fired or refused job opportunities, which they argue amounts to discrimination against them for "just having Gender Critical beliefs". This article is a case study looking into some of the things which can be masked by this idea.

As this case study references real people Trans Safety Network gave a lot of consideration as to whether to name the people mentioned in this story. This person is well networked within the GC movement, is very openly publicly involved in Gender Critical activism and vigorously tries to bring it into educational spaces, disregarding the concerns of students. Ultimately we decided that it was best to anonymise the individual primarily to avoid detracting from the issue we want to raise awareness of. Specifically regarding one the ways in which gender critical people are trying to force their beliefs into spaces which are incompatible with them. But also to avoid falling into the trap of helping to make this individual a martyr for the cause, as so many Gender Critical people have been before them.

"All I said was, that human beings can't change sex"

This thought-terminating cliché is usually the very tip of the iceberg. The rest of this person’s posts reveal the ways they brought their dogmatic and extreme hostility towards trans people into their workplace. Covered up under that trivialising claim is an approach which this person admits to fellow GC supporters is confrontational. In the course of this they demonise students raising concerns about said approach. They disregard clear signs that management have welfare concerns regarding their behaviour. In the end, the school elected to use a contractual technicality to sack them without having to go through a formal disciplinary process. This means there isn’t an official record of their behaviour and they are able to continue it elsewhere.

Andrea (not her real name) was a teacher at an East London school. In her own account of the story, she was sacked after telling students in a Personal Development class she was covering at the time that "human beings can't change sex". Further posts of hers reveal that she also went on a tirade for the rest of the lesson about trans issues. Among other things they told students that trans women's neovaginas are "not a vagina", but a "wound that some men have made for them", which "is constantly trying to heal".

Despite having been a teacher for decades so far as we are able to tell, she seems completely unaware that speaking about trans women's bodies in this way is objectifying and dehumanising. For any trans children who in the class who are not yet "out" about being trans this would also be intimidating and humiliating. This is alongside being inaccurate and obviously not part of the school's curriculum on the topic.

Excepting incidents involving surgical complications (which is a risk of any surgery) trans women's vaginas often heal normally resulting in a high rate of satisfaction reported by patients. It is standard in scientific literature to refer to a trans women's genitals after surgical reconstruction as a vagina, or neovagina. Trans women are not alone in having neovaginas - some cisgender women have neovagina construction following disease, sexual injury or congenital variations leading to the absence of a vaginal cavity.

Andrea is a long time Gender Critical activist who has been involved in anti-trans organisations including:

In a speech she gave for Women's Declaration International (at the time known as Women's Human Rights Campaign), she spoke enthusiastically about the need for feminists to stop pushing back against the steady infiltration of the American homophobic and religious right wing lobby which has been working with many Gender Critical groups and instead called for Gender Critical activists to unite over the "single issue" with WoLF (the Women's Liberation Front, who have worked extensively with American ultraconservative groups such as the Heritage Foundation and Alliance Defending Freedom) in supporting what they described openly in their speech as "anti-trans activists".

Andrea added that they talked about "prostituted castrated boys in Bankok[sic], and the forced surgery on gay men in Iraq and Pakistan". Forced surgery is of course abhorrent, but it seems clear that these are emotive uses of exploitation in these places that does nothing to humanise those trans people who find themselves engaged in survival sex work around the world, nor to seriously distinguish the actually trans people living in Pakistan and Iraq from the gay men who are targeted for violence or forced transition in some cases.

Instead, as a teacher covering the educational needs of students on LGBT issues by her own account of things they appear to have been entirely one-sidedly engaged in demonising trans people and trans healthcare. It's hard to believe that any of this material about the plight of trans people in other countries was part of the curriculum for helping inform students about LGBT issues for their wellbeing and personal development, or even in line with the way that Human Rights monitoring organisations discuss the needs of those working in the Thai sex industry, or the extreme and brutal conditions facing trans women in Iraq. And that is aside from the question of whether lessons about Personal Development are the place to be raising controversial and un-educated hot takes about trans victimisation around the world. The purpose of the Personal Development curriculum is to develop confidence, tolerance, and citizenship among students so that they are ready for further progress in education, training or employment.

Elsewhere she makes clear that she is unable to see this open hostility to trans people as a potential student welfare issue. Instead she asserts the student who reported her was being "hysterical", as a result of "indoctrination" by a "trans cult". This last point is reflective of wider conspiracy theory beliefs that trans people form a secret controlling organisation which hold an undue amount of power and influence within the world, despite for example in the UK having never had a single elected openly trans MP. The most popular version of this theory often runs with a view that "Big Pharma" or prominent philanthropists are funding them. These philanthropists are often wealthy Jews in the conspiracy theory) By accusing students of dogma she seems to dismiss the idea that there is any need to consider the student welfare concerns raised in using their position to lecture students in an anti-trans rant that is not amenable to any sort of questioning or criticism from students. 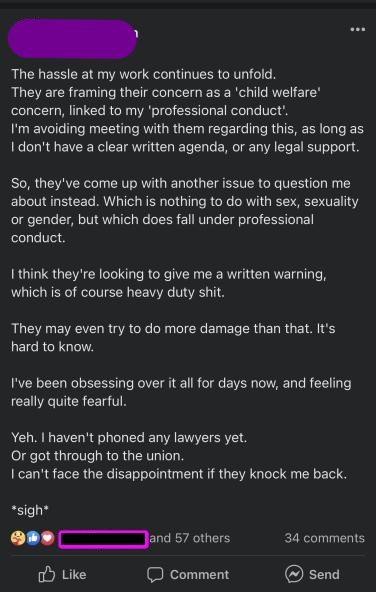 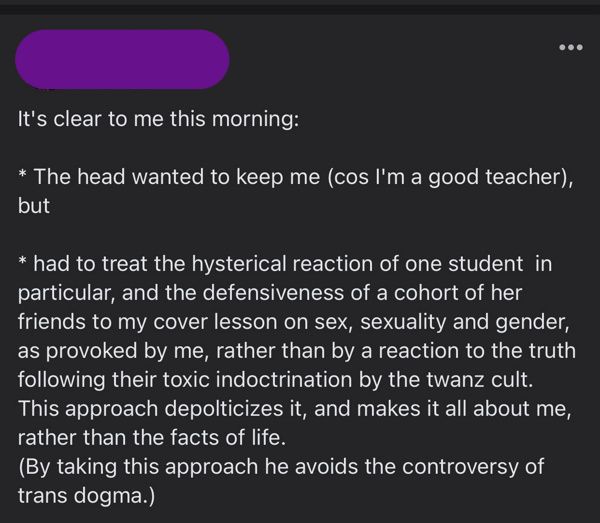 Andrea went further still in additional comments we have seen and suggested that maybe the student is in need of referring for "her involvement in the twanz lobby as a risk of radicalisation". This likely refers to a potential threat of abusing the Prevent duties teachers have to "have due regard to the need to prevent people from being drawn into terrorism", and therefore refer them on to safeguarding bodies or procedures connected with counterterrorist programmes.

There is absolutely no reason why a student who objects to being taught anti-trans material in a class ought to be treated as some sort of dangerous militant. It seems likely that if there were an out trans student in class they would at great risk of being subject to either personal abuse in this vein, or potentially procedural bullying through flagging their trans identity itself as a political threat, just going on Andrea's own account of things. It is clear that she perceives simply complaining about the ideology being lectured in the classroom is itself as a threat. 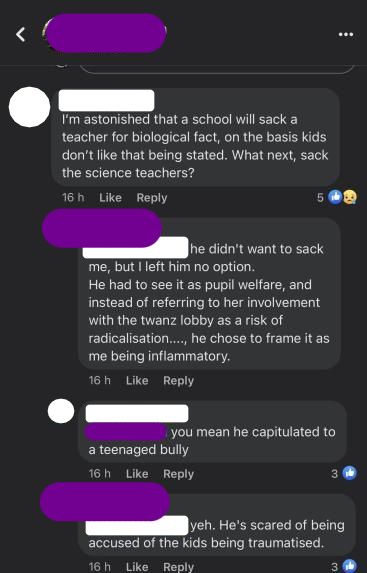 In this instance, the activist we are documenting had been campaigning in schools she worked at to push an anti-trans activist agenda on students for well over two years by the time this school in question finally sacked them. In conjunction with their long term activism they seem to have worked hard to bring their hard-line trans exclusionary politics onto the heads of students. 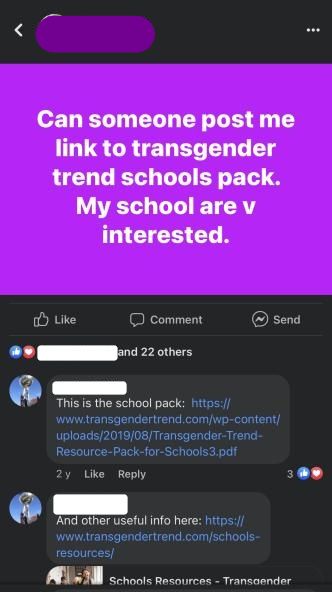 The point of reporting this issue is of course not to demonise the subject in response. We are trying to raise awareness of the fact that it is not just mere beliefs that are the issue, despite what Gender Critical activists might claim. This short catchphrase attempts to handwave away the behaviour behind it which Gender Critical campaigners engage in. Following the Forstater employment tribunal appeal, we know that they are entitled to have their beliefs. However this is not a license to "misgender with impunity", as was made clear in a statement by EHRC Chair Baroness Falkner, which we can only assume includes not protecting the sort of dehumanising rhetoric deployed in a professional setting, as seen above. Trans Safety Network believes such unchecked proselytising of anti-trans rhetoric is harmful to students and the goal of Personal Development education. We commend the school for showing transphobia the door.

We highly recommend that other schools take seriously their responsibility to students in protecting them from politically charged invective demonising a protected minority in this manner.