Following the harassment of trans Twitch streamer Clara Sorrenti (aka Keffals) by far right internet forum Kiwi Farms, there has been significant pressure on third-parties who enable Kiwi Farms to operate to withdraw their services. Keffals, alongside others, has created a website outlining the details of the campaign to #DropKiwiFarms.

A key focus of this campaign has been Cloudflare, an organisation which provides DDoS protection services to the Kiwi Farms website.

Initially Cloudflare was unresponsive to public criticism, deciding to delete publicity tweets under which calls for the service to cease enabling Kiwi Farms to operate gathered.

Since the release of the website, even more significant harassment of Keffals has taken place. This involved one user of Kiwi Farms traveling to the location in Belfast in which Sorrenti was staying, having fled her home in Canada multiple times. A letter - held and photographed outside of Sorrenti’s address, shown below - contained slurs related to Sorrenti’s trans identity, as well as reference to, and a call to arms of, paramilitary organisations in the North of Ireland. 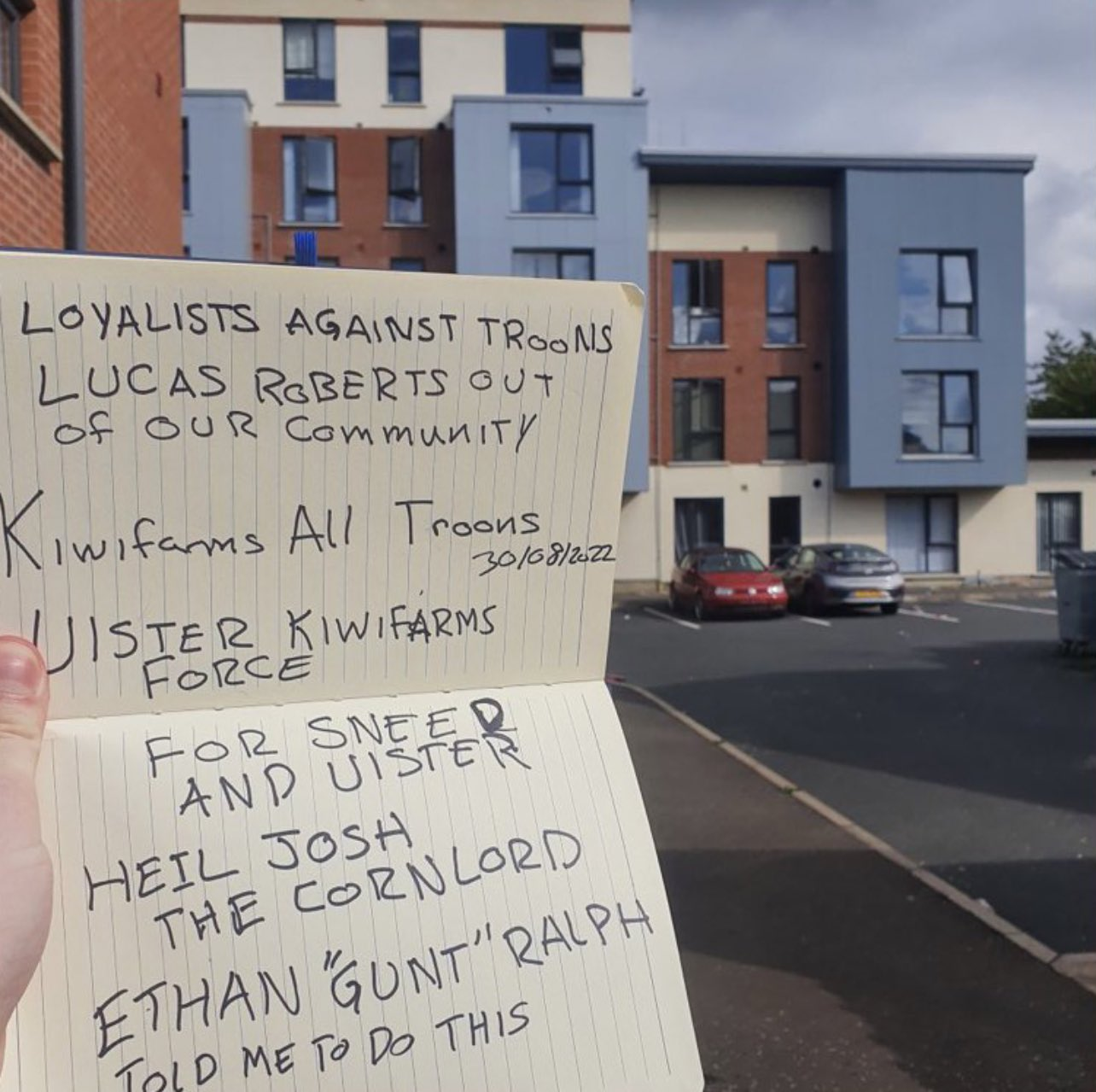 Despite this significant and unlawful harassment enabled by the Kiwi Farms forum, Cloudflare today released a deeply concerning statement outlining why it would not be taking action to remove its services from the website. Instead, Cloudflare maintains that it would be a potential “abuse of power” for it to cease business dealings with a company formerly known as “Final Solutions LLC” - a reference to the holocaust.

In its statement, Cloudflare argued that it was wrong to previously withdraw its security services from the “neo-Nazi troll site The Daily Stormer” and the “conspiracy theory forum 8chan”. This is because:

after both terminations we saw a dramatic increase in authoritarian regimes attempting to have us terminate security services for human rights organizations — often citing the language from our own justification back to us.

Rather than adopting a position of moral courage to protect the most marginalised, Cloudflare has washed its hands of moral responsibility for the harassment, violence, and deaths faced by the trans community at the hands of Kiwi Farms users. As Desmond Tutu famously stated:

If you are neutral in situations of injustice, you have chosen the side of the oppressor. If an elephant has its foot on the tail of a mouse and you say that you are neutral, the mouse will not appreciate your neutrality.

Most upsettingly, Cloudflare tries to defend its enabling of Kiwi Farms by citing other times it has supported queer people. As an example, Cloudflare cites:

when a site that opposed LGBTQ+ rights signed up for a paid version of DDoS mitigation service we worked with our Proudflare employee resource group to identify an organization that supported LGBTQ+ rights and donate 100 percent of the fees for our services to them. We don't and won't talk about these efforts publicly because we don't do them for marketing purposes; we do them because they are aligned with what we believe is morally correct.

Here Cloudflare presents some warped version of moral accounting: it is justified in providing services to a site which attacks LGBTQ+ people, so long as it gives the profits back to the LGBTQ+ community. This is not justifiable, and not an equivalent exchange.

Another example Cloudflare gives is its provision of free services to The Trevor Project - a helpline designed help queer people in crisis, especially with regard to suicide prevention. Ironically, the last few days saw a concerted attempt by Kiwi Farms users, alongside users of 4chan, to overwhelm the Trevor Project crisis hotline by initiating fake chats. This was intentionally designed to limit the access of queer people in crisis to immediate help. This makes apparent how the free services donated by Cloudflare might easily be offset by the harms inflicted by malicious communities which Cloudflare itself enables.

It is perhaps unsurprising that Cloudflare adopts such a stance in light of internal information about the company. I discussed whether Cloudflare was a safe place to work for trans people with Eric, an ex-employee at Cloudflare. Eric explained how Matthew Prince - whose name can be found on the aforementioned statement - led a culture that was damaging to trans employees:

Matthew Prince once personally outed a trans employee to me when I was talking about the lack of diversity in the company so no I don’t think it’s a safe space. Honestly I was hoping that a lot of responsibility had just been taken away from Matthew by someone reasonable, but clearly that hasn’t happened.

It is clear that Cloudflare must take responsibility for the damage it has inflicted on trans people in the workplace, and that it continues to inflict through its wider “neutral” stance on providing services for those who provide a space for the unlawful harassment of trans and neurodiverse people.

NB Pseudonyms have been used where individuals wish to remain anonymous